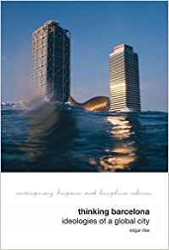 Thinking Barcelona studies the ideological work that redefined Barcelona during the 1980s and adapted the city to a new economy of tourism, culture, and services. The 1992 Olympic Games offered to the municipal government a double opportunity to establish an internal consensus and launch Barcelona as a happy combination of European cosmopolitanism and Mediterranean rootedness. The staging of this municipal "euphoric postpolitics," which entailed an extensive process of urban renewal, connects with the similarly exultant contexts of a reviving Catalan nation, post-transitional Spain, and post-Cold War globalization. The transformation of Barcelona, in turn, contributed to define the ideologies of globalization, as the 1992 Games were among the first global mega-events that celebrated the neoliberal "end of history." Three types of materials are examined: political speeches and scripts of the Olympic ceremonies, with special focus on Xavier Rubert de Ventós's screenplay for the reception of the flame.