Beyond Sight: Engaging the Senses in Iberian Literatures and Cultures, 1200-1750 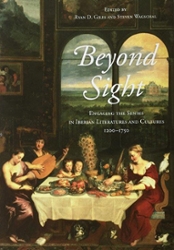 The volume explores the ways in which Iberian writers crafted images of both Old and New Worlds using the non-visual senses (hearing, smell, taste, and touch). It argues that the uses of these senses are central to understanding Iberian authors and thinkers from the pre- to early modern periods. Medievalists delve into poetic theorizations of the sensorial plane to show how sacramental and purportedly miraculous sensory experiences were central to efforts of affirming faith. Renaissance and early modernist essays shed light on experiences of pungent, bustling ports and city centers, and the exotic musical performances of empire. The collection covers a wide array of approaches including literary and cultural history, philosophical aesthetics, affective and cognitive studies, and theories of embodiment. Beyond Sight expands the field of sensory studies to focus on the Iberian Peninsula and its colonies from historical, literary, and cultural perspectives.