Minding Animals in the Old and New Worlds 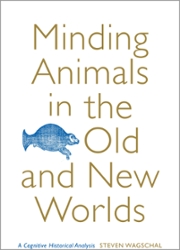 Minding Animals in the Old and New Worlds employs current research in cognitive science and the philosophy of animal cognition to explore how humans have understood non-human animals in the Iberian world, from the Middle Ages through the early modern period. Using texts from European and Indigenously-informed sources, Steven Wagschal argues that people tend to conceptualize the minds of animals in ways that reflect their own uses for the animal, the manner in which they interact with the animal, and the place in which the animal lives. Often this has little if anything to do with the actual cognitive abilities of the animal. However, occasionally early authors made surprisingly accurate assumptions about the thoughts and feelings of animals.

Wagschal explores a number of ways in which culture and human cognition interact, including: the utility of anthropomorphism; the symbolic use of animals in medieval Christian texts; attempts at understanding the minds of animals in Spain’s early modern farming and hunting books; the effect of novelty on animal conceptualizations in "New World" histories, and how Cervantes navigated the forms of anthropomorphism that preceded him to create the first embodied animal minds in fiction.