The Latin American Literary Boom and the U.S. Nationalism during the Cold War 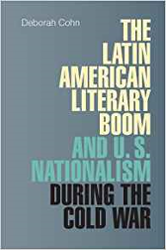 During the 1960s and 1970s, when writers such as Julio Cortazar, Carlos Fuentes, Gabriel Garcia Marquez, and Mario Vargas Llosa entered the international literary mainstream, Cold War cultural politics played an active role in disseminating their work in the United States. Deborah Cohn documents how U.S. universities, book and journal publishers, philanthropic organizations, cultural centers, and authors coordinated their efforts to bring Latin American literature to a U.S. reading public during this period, when interest in the region was heightened by the Cuban Revolution. She also traces the connections between the endeavors of private organizations and official foreign policy goals.

The high level of interest in Latin America paradoxically led the U.S. government to restrict these authors' physical presence in the United States through the McCarran-Walter Act's immigration blacklist, even as cultural organizations cultivated the exchange of ideas with writers and sought to market translations of their work for the U.S. market.