Universal Citizenship: Latina/o Studies at the Limits of Identity 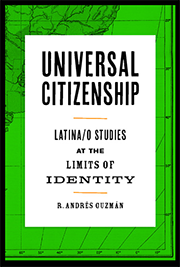 Recently, many critics have questioned the idea of universal citizenship by pointing to the racial, class, and gendered exclusions on which the notion of universality rests. Rather than jettison the idea of universal citizenship, however, R. Andrés Guzmán builds on these critiques to reaffirm it, especially within the fields of Latina/o and ethnic studies. Beyond conceptualizing citizenship as an outcome of recognition and admittance by the nation-state—in a negotiation for the right to have rights—he asserts that, insofar as universal citizenship entails a forceful entrance into the political from the latter’s foundational exclusions, it emerges at the limits of legality and illegality via a process that exceeds identitarian capture.

Drawing on Lacanian psychoanalysis and philosopher Alain Badiou’s notion of “generic politics,” Guzmán advances his argument through close analyses of various literary, cultural, and legal texts that foreground contention over the limits of political belonging. These include the French Revolution, responses to Arizona’s H.B. 2281, the 2006 immigrant rights protests in the United States, the writings of Oscar “Zeta” Acosta, Frantz Fanon’s account of Algeria’s anticolonial struggle, and more. In each case, Guzmán traces the advent of the “citizen” as a collective subject made up of anyone who seeks to radically transform the organizational coordinates of the place in which she or he lives.