Caribbean Migrations. The Legacies of Colonialism 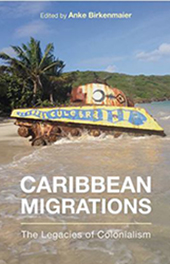 With mass migration changing the configuration of societies worldwide, we can look to the Caribbean to reflect on the long-standing, entangled relations between countries and areas as uneven in size and influence as the United States, Cuba, Hispaniola, Puerto Rico, and Jamaica. More so than other world regions, the Caribbean has been characterized as an always already colonial region. It has long been a key area for empires warring over influence spheres in the new world, and where migration waves from Africa, Europe, and Asia accompanied every political transformation over the last five centuries. In Caribbean Migrations, an interdisciplinary group of humanities and social science scholars study migration from a long-term perspective, analyzing the Caribbean’s “unincorporated subjects” from a legal, historical, and cultural standpoint, and exploring how despite often fractured public spheres, Caribbean intellectuals, artists, filmmakers, and writers have been resourceful at showcasing migration as the hallmark of our modern age.