The Specter of Races: Latin American Anthropology and Literature between the Wars 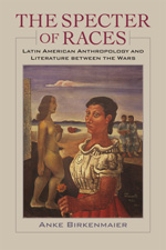 Arguing that race has been the specter that has haunted many of the discussions about Latin American regional and national cultures today, Anke Birkenmaier shows how theories of race and culture in Latin America evolved dramatically in the period between the two world wars. In response to the rise of scientific racism in Europe and the American hemisphere in the early twentieth century, anthropologists joined numerous writers and artists in founding institutions, journals, and museums that actively pushed for an antiracist science of culture, questioning pseudoscientific theories of race and moving toward more broadly conceived notions of ethnicity and culture.

Birkenmaier surveys the work of key figures such as Cuban historian and anthropologist Fernando Ortiz, Haitian scholar and novelist Jacques Roumain, French anthropologist and museum director Paul Rivet, and Brazilian sociologist Gilberto Freyre, focusing on the transnational networks of scholars in France, Spain, and the United States to which they were connected. Reviewing their essays, scientific publications, dictionaries, novels, poetry, and visual arts, the author traces the cultural study of Latin America back to these interdisciplinary discussions about the meaning of race and culture in Latin America, discussions that continue to provoke us today.

Birkenmaier, Anke. 2016. The Specter of Races: Latin American Anthropology and Literature between the Wars. University of Virginia Press.