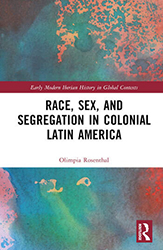 This book traces the emergence and early development of segregationist practices and policies in Spanish and Portuguese America - showing that the practice of resettling diverse indigenous groups in segregated "Indian towns" (or aldeamentos in the case of Brazil) influenced the material reorganization of colonial space, shaped processes of racialization, and contributed to the politicization of reproductive sex.

The book advances this argument through close readings of published and archival sources from the 16th and early-17th centuries, and is informed by two main conceptual concerns. First, it considers how segregation was envisioned, codified, and enforced in a historical context of consolidating racial differences and changing demographics associated with the racial mixture. Second, it theorizes the interrelations between notions of race and reproductive sexuality. It shows that segregationist efforts were justified by paternalistic discourses that aimed to conserve and foster indigenous population growth, and it contends that this illustrates how racially-qualified life was politicized in early modernity. It further demonstrates that women’s reproductive bodies were instrumentalized as a means to foster racially-qualified life, and it argues that processes of racialization are critically tied to the differential ways in which women’s reproductive capacities have been historically regulated.